Why is ACL re-tearing mostly seen in younger athletes?

The steps to follow after an ACL injury are:
🦿Surgery: decide if rehab is enough or if surgery is needed. ACL reconstruction (ACLR) surgery does not repair the damaged ligament, but rather creates a new ligament using other tissue from the leg (patellar tendon or hamstring tendon).
🩺Rehab: exercises and training, it takes several months.
Treatment is dependent on the severity of the injury and the athlete’s individual goals.
Usually, after ACLR, 87% successfully returned to play at a mean 1 year after surgery. About one-third of ACL reconstructed athletes experience a second ACL injury. Young athletes who returned to play in or less than 9 months had a 3 to 5 times higher rate of new ACL injury. FACTORS INVOLVED IN RE-TEARING:
🦿Surgery
- The incidence rate of re-tearing within 24 months is six times greater.
- Correct positioning of the graft is important; it should restore "normal" functioning/mechanics.
- Size of the graft, smaller ones have less durability.
- Donor grafts have a higher risk of re-tearing, especially in younger athletes.
- Surgeons recommend ACL reconstruction for those who wish to return to sport. Usually, 65% return to their pre-injury level, while only 55% return to competitive sport. Male athletes are approximately 1.5 times more likely to return to either level of sports.
🏋🏼‍♀️Recovery
- Proper rehab: focusing on graft incorporation (6 to 9 months depending on the graft) and restoring muscle strength.
- Improve stability and neuromuscular control.
- Return to play (RTP): need to confirm that the athlete is ready (enough strength and stability) to return safely. The focus on younger athletes should be on an outcome of 2 years.
- Risk of exposure: minimizing secondary injury and long-term consequences. It may be advantageous for athletes to continue rehabilitation and delay their return.
- Recuperation time should be respected, starting too soon can lead to damage, as well as performing high activity levels.
Secondary damage can develop from the surgery and the injury itself, for example, knee osteoarthritis (x10 more likely to develop early arthritis in the next 10-15 years), ACL combined with a meniscus injury.
The general guidelines are as follow: 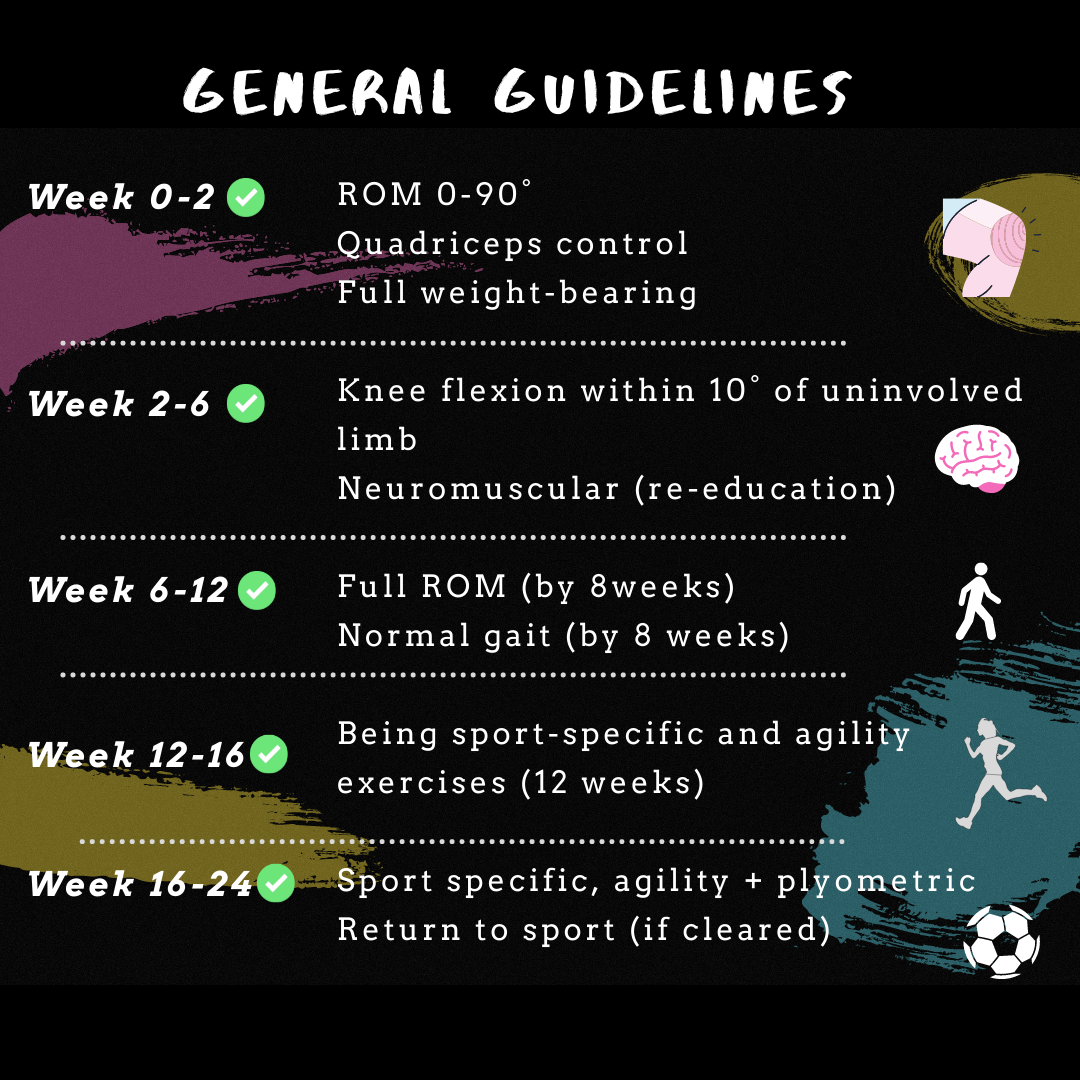 ⭐️Individualization
- High-risk sports should be avoided, especially in athletes younger than 25 years old. Of course, athletes involved in any pivot sport can't avoid that activity. Therefore, the doctor, as well as the physiotherapist, should be aware of the different individual factors and structure a personalized program to optimize the results and avoid re-tearing.
- 8-10% of athletes return to competitive sport before 9 months and 29% return between 9 and 12 months.
- A total of 63% return at 12 months, meanwhile 7% do not return.

WHY IS IT MORE COMMONLY SEEN IN YOUNGER PEOPLE?
The causes of graft failure are dependent on the athlete's age, high-risk sports participation, incomplete healing, and inadequate rehabilitation.
- Young athletes are more susceptible to ACL injuries because there is greater ligament length due to the rapidly developing bones.
- They also tend to return sooner to their high-risk sports, which usually means a deficit in strength and functionality.
Data from a Swedish Rehabilitation Outcome Registry showed that 50% of adolescent patients (15-20 years old) resumed strenuous sports by 8 months post-op despite only 29% achieved satisfactory muscle function. A similar study by Toole et al reported that only 14% of adolescent patients (mean age of 17 years) met recommended RTP criteria.
- The high-risk population involves younger people, especially high-schoolers, as well as female athletes.
- The risk of re-injury is found within the first 2 years after reconstruction in both, the reconstructed knee and the contralateral knee.
- Compared with uninjured athletes, players younger than 25 years old have a reinjury rate of 23% and are at 6 times greater risk.
- Highest rates of recurrent ACL ruptures occur in men’s football, women’s gymnastics, and women’s soccer, whereas the highest rates of primary ACL ruptures occur in men’s football, men’s, and women’s lacrosse, and women’s gymnastics.
- Furthermore, every aging year equals a lower risk of revision ACLR (8% per year) and contralateral ACLR (4% per year).
TEARING ON THE OPPOSITE LEG OR THE SAME LEG?
- In one study they saw a total of 4 re-tearings before 12 months post-surgery: 1 graft rupture (RTP at 9 months) and 3 contralateral (11.6 months after resuming 3 weeks earlier and 9 weeks after).
- Graft ruptures occur in 15.6% at a mean time of 29 months from surgery and 15 months from the return to sport.
- 18.8% of contralateral ACL injuries occur at a mean time of 28 months from surgery and 16 months from RTP.
- Around 32.8% of athletes have at least 1 further ACL injury after the primary surgery.
- The increased incidence of contralateral injury is hypothesized to be due to the same predisposed risk factors from the initial injury.
- Women have a lower muscle mass which contributes to a higher risk for ACL injury. From the ages of 15 to 20, female athletes account for the largest number of ACL injuries.
- Women are two times more likely to suffer an injury on the opposite knee.
- Non-contact ACL rupture: 60% in female athletes versus 41% in male athletes.
- 9.5% of athletes suffer a second ACL injury within 24 months of returning to activity with 20.5% sustaining an opposite leg injury and 9% on the same leg.
- A higher proportion of females (23.7%) suffered an opposite leg injury compared to males (10.5%). Most injuries occurred early, within 72 athlete exposures.
- Women’s soccer players had a significantly higher rate of recurrent ACL ruptures compared with men’s soccer players.
- The secondary ACL injury rate (ipsilateral + contralateral) for patients younger than 25 years is 21-23%.
PREVENTION:
In my previous article, you can find some examples and suggestions for rehab. However, more attention needs to be drawn towards neuromuscular training during the pre-season, as well as dynamic warm-ups before games, which may reduce the risk of injury early in the season and during games. 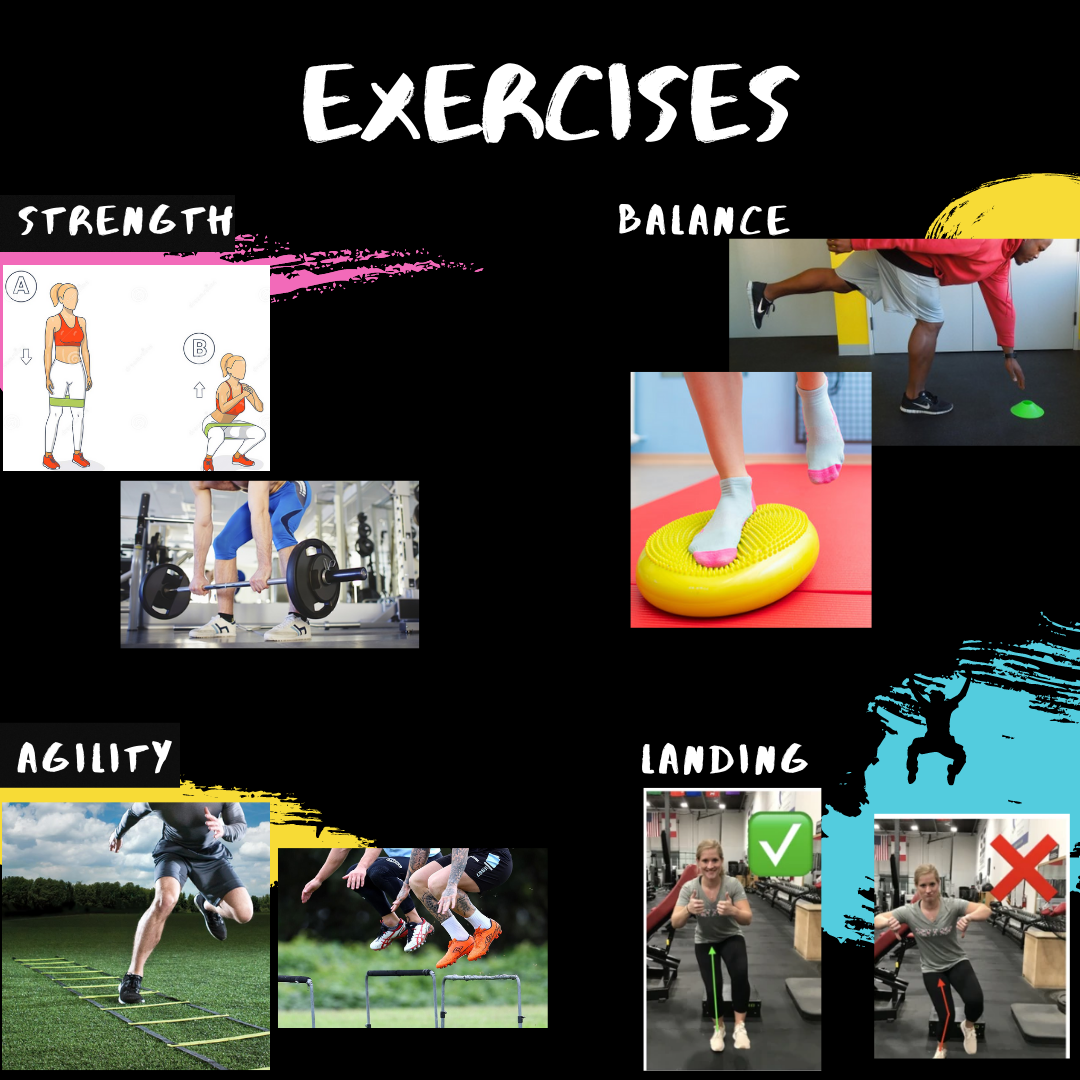 Neuromuscular training and rehabilitation play an important role. Most of the injuries occur at the beginning of the season (pre-season), and/or early on in the game, which discards fatigue as a risk factor but indicates inadequate physical preparation at the beginning of the season.
Increased training load during preseason without recovery, and reduced or asymmetrical strength and flexibility at the beginning of the season play a role.
The focus should not only be on the muscles surrounding the knee, but also the muscles of both legs and the trunk, while also focusing on balance, proprioception, and neuromechanics. However, it is important to take into account the factors which increase the risk of re-tearing (age, sex, condition, type of sports, etc)
Nearly 1 in 4 young athletic patients who suffered an ACL injury and which returned to a high-risk sport will sustain another ACL injury at some point in their career (usually, early in the RTP period).
To summarize the current literature, a hamstring-to-quadricep strength ratio of at least 85% of the baseline is recommended before athletes return to cutting, pivoting, and jumping sports. The symmetry ratio between both legs for time and distance for single-legged, crossover, and triple hops for distance, should be within >90%.
RTP guidelines should be modified, to capture functional goals and secure safe return; recovery time should be respected.
Neuromuscular training plays a big role since it has been successful in reducing primary risk factors and injury incidence in young athletes
REFERENCES:

Why is ACL re-tearing mostly seen in younger...

Protein, the forgotten macronutrient in endur...

Developing a sustainable source of motivation

Can Anyone Run A Marathon?