Tennis is a sport with high demands of the whole body. The loads of the hitting arm during forehand and backhand and especially during the overhead serve are immense, but also the load on the lower body because there is a lot of starting, stopping, jumping and change of direction going on. To be able to keep the upper body in good positions, also the core is constantly working.

Because of all this, injuries are highly seen in the sports tennis. Therefore, we will discuss the most common injuries.

👉 Rotator Cuff injuries
The rotator cuff is comprised of four muscles and tendons that come together to provide stability and mobility to the shoulder ( see names in figure). The rotator cuff can tear gradually, as a result of overuse, but can also result from an acute injury. 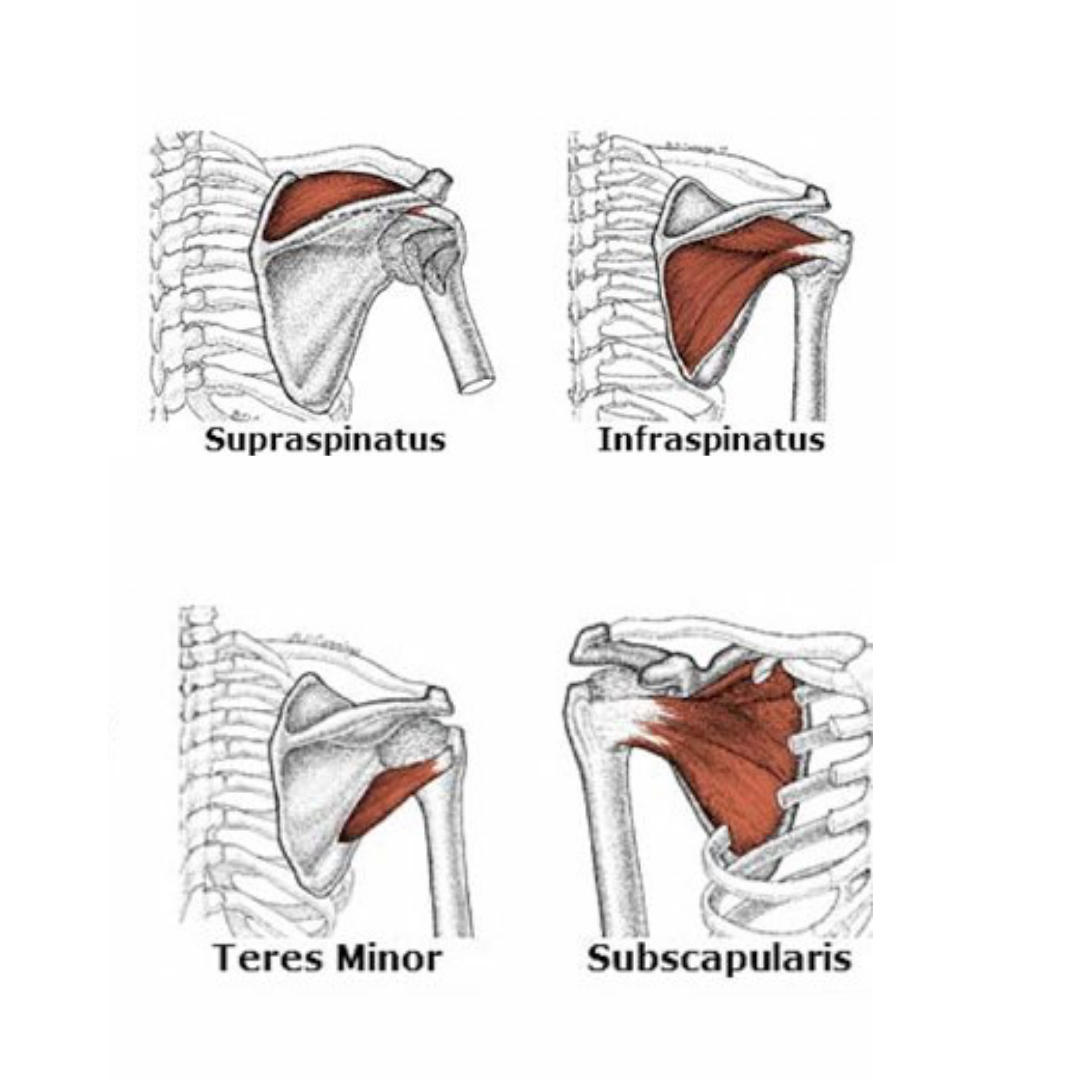 Shoulder impingement syndrome is one the most often seen causes of shoulder pain in tennis players. It occurs when the tendons of the rotator cuff ( the suprispinatus) and the subacromial bursa are pinched in the narrow space beneath the acromion. This impingement causes inflammation of tendons and bursa. When the friction increases, the swelling increases also so there can originate a vicious cycle. The pain occurs especially during overhead strokes, such as the serve. 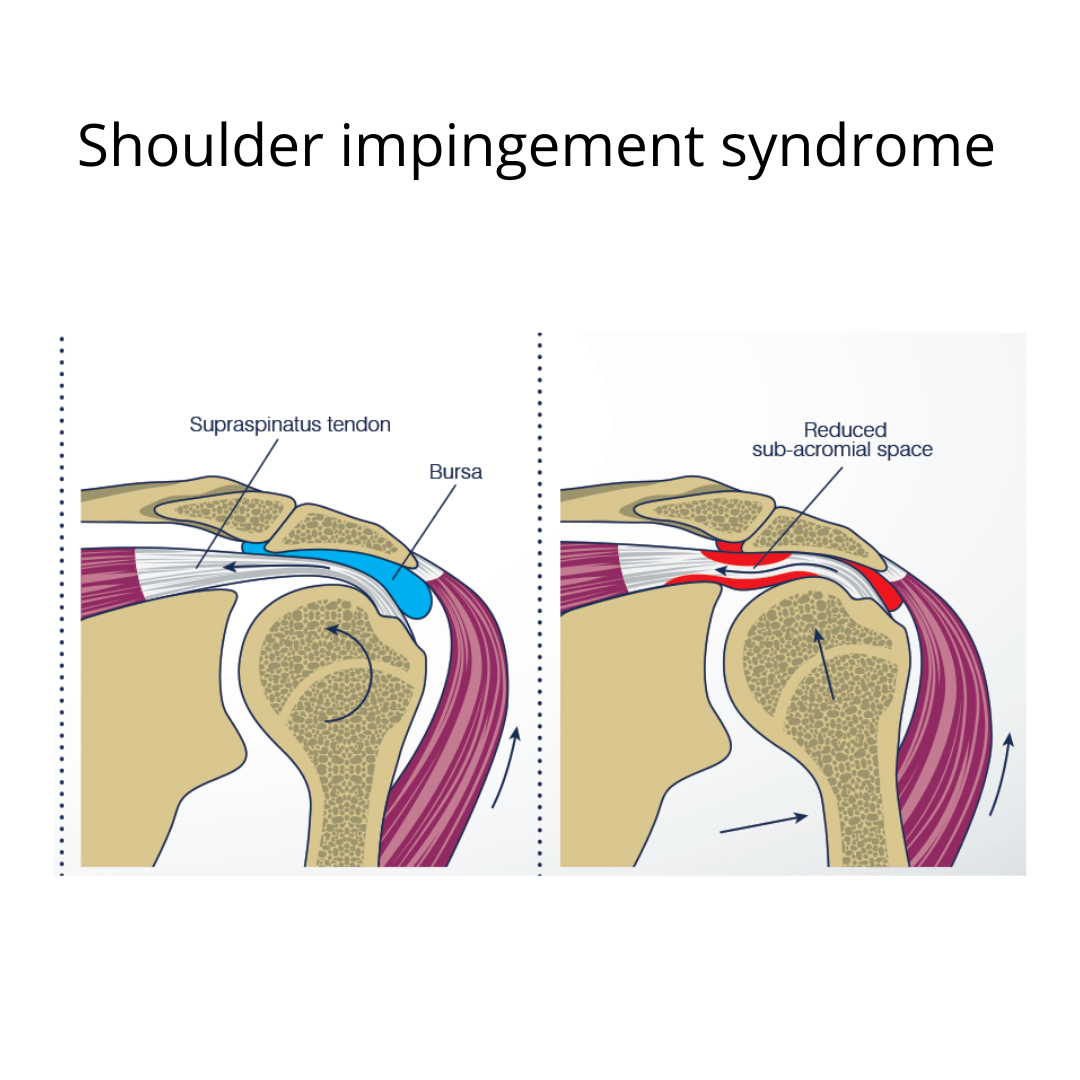 The patellar tendon is the tendon between the underside of the patella (knee cap) and the tibia (shin), see figure.

Biomechanically, the force generated by the Quadriceps Muscle is first transmitted trough the Quadriceps Tendon to the Patella and then through the Patellar Tendon to the Tibia.
All the running, quick starting and stopping, and direction changes inherent in the game of tennis can be very hard on the joints of the lower body, and the Patellar Tendon of the knee (and the knee in general) is trying to cope the most with these forces. In the right figure, you can see the torques on the tendon during jumping. Remarkable to see are the peaks at take-off and landing, which causes high risks of injuries.

All this can cause microscopic tears and injury to this particular tendon. ATP injury data show that patellar tendon injury occurs at a 2:1 ratio relative to the quadriceps tendon. 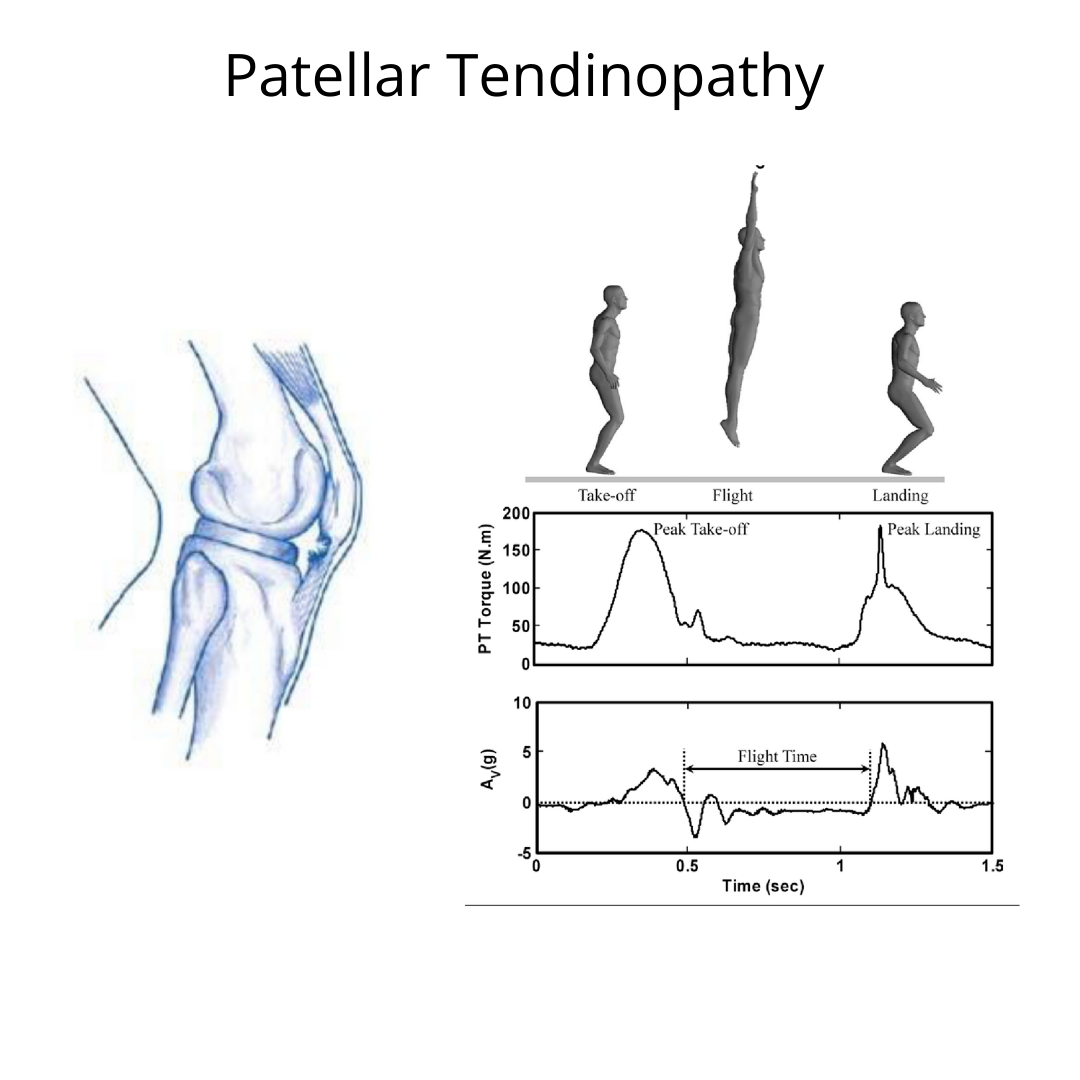 In documentation of the ATP, the spine was the leading area of musculoskeletal injuries ( dating between 2012-2016).

Again the sudden stops and starts, but also trunk rotation, lateral flexion and hyperextension of the lower back increases the risk of injuries at the spine. An example of an often seen spine injury in tennis is the lumbar strain. Tennis put a lot of stress on the lumbar spine (see figure). This stress is especially seen during the serve when often the backward arching movement is used. In the figure, you can see multiple phases of the serve and therefore the different positions of the back during the motion. A good thoracic mobility is very important to minimize the load in the lumbar spine.

The excessive strain on the bones of this spine during the extension and rotation movements ( together with poor technique, muscle weakness and fatigue) can cause lumbar stress injuries. 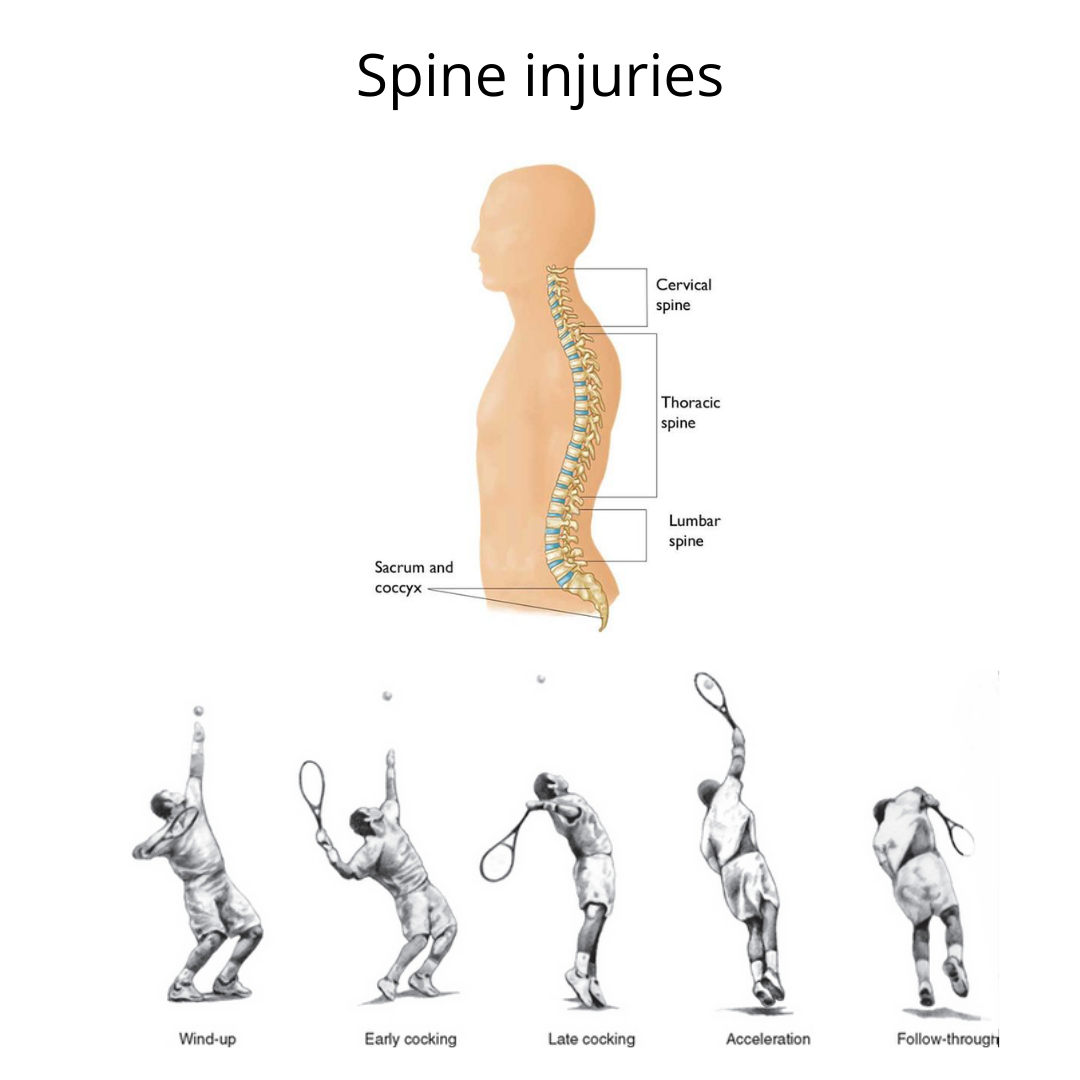 A wrist tendinopaty is an overuse injury of one of the tendons around the wrist. Pain on the ulnar side of the wrist is common among elite tennis players, with the extensor calpi ulnaris (ECU) as the most seen tendon that is injured. Often, it occurs in the non-dominant wrist with players using a double-handed backhand. This is because of the fact that the non-dominant hand goes in extreme extension and ulnar deviation before contact to try to create a lot of topspin. 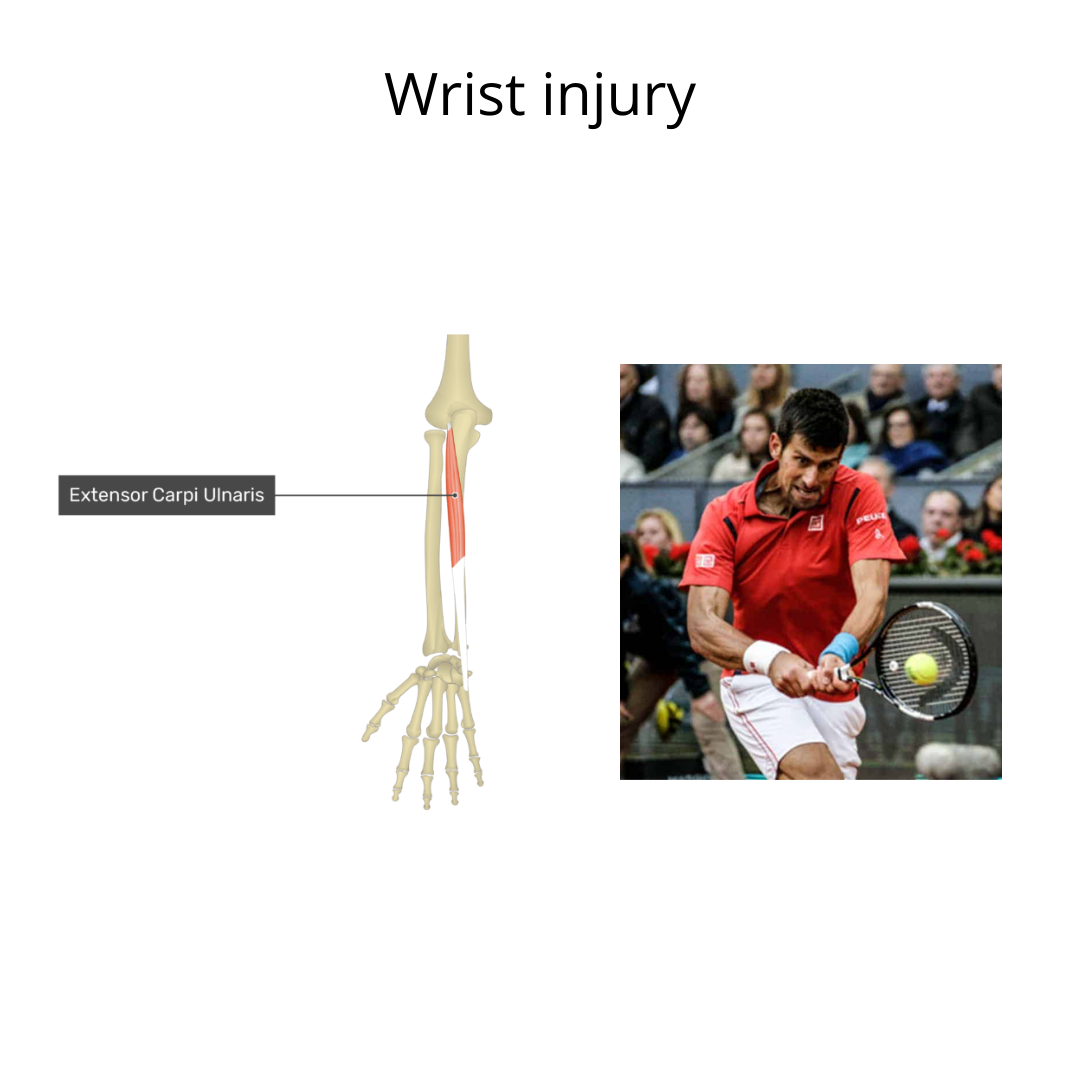 1) increased use of the wrist to create topspin

2) the use of the double handed backhand

3) the use of a higher string tension

The previous injuries are mostly build up over time ( chronic injuries), but in tennis there are also common acute injuries, such as muscle strains, an ankle sprain, or a rupture in the medial ligament of the knee.

Tendinopathy in tennis by Jayanthi

Why is ACL re-tearing mostly seen in younger...

Protein, the forgotten macronutrient in endur...

Developing a sustainable source of motivation

Can Anyone Run A Marathon?